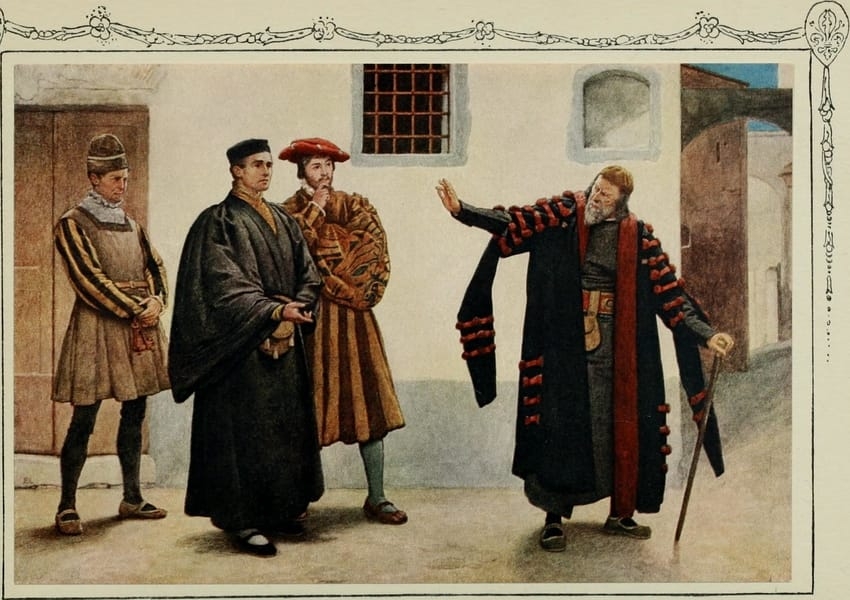 Need a concise look at the relevance of Shakespeare's Merchant of Venice to today's society? Read our upper intermediate reading comprehension with questions and answers.

Shakespeare's play The Merchant of Venice was probably written in 1596 or 1597, borrowing several details from the plots of contemporary Italian stories, including the characters of the merchant, the poor suitor, the fair lady and the villainous Jew. So, can this play still hold the attention of audiences today, well over 400 years later? Let us examine the main themes of the play to see if they are still at work in this new millennium.

Firstly, the whole play centres around the complex relations involved in love, friendship and marriage. We see Portia, Shakespeare's first great heroine, struggling with the difficult task of choosing a husband using the system of the three caskets devised by her dead father. Portia wishes to be the dutiful daughter but has to reconcile this with her desire to follow her romantic inclination to marry Bassiano. This is a situation many theatre audiences can still relate to: arranged marriage remains a reality for many today and even in more liberal families, potential partners can cause conflict if they do not fit with the family traditions. We continue to see this theme emerge in films of the 21st Century, for example The Big Sick (2017), Love Actually (2003), My Big Fat Greek Wedding (2002) and Bend it like Beckham (2002). Love can also come into conflict with friendship. In The Merchant of Venice we see Bassiano torn between his love for Portia and his friendship with the selfless Antonio, who has placed himself in danger to help his friend. Again, this is a theme still very relevant today as we try to balance the attention we give to friends, colleagues, family and romantic partners.

Shakespeare's treatment of prejudice in the play also highlights some interesting parallels with modern day society. Through Shylock's well known 'I am a Jew' speech, we are brought to understand that Shylock's character is largely a result of the persecution he has endured as a Jew operating in Venice at a time when Jews were reviled by Christian society. At this time, Jews were actually banished from Elizabethan London and audiences of that time would readily understand the prejudices involved. Nevertheless, the racism Shylock has suffered is not allowed to excuse his behaviour and we see justice winning through by the end of the play. Today's news is sadly still full of examples of racial prejudice, with reports of anti-Semitism in British politics repeatedly hitting the headlines. Similarly, the powerlessness of women at the time of the play is also revealed by Portia's claim 'so is the will of a living daughter curbed by the will of a dead father'. The power given to the suitors in choosing either the gold, silver or lead casket emphasises the view of women as an object or prize to be won. Across the globe this is still a concern for women today. The popularity of the 2015 film 'Suffragette' about the fight for women to receive the right to vote in Britain shows how the subject of discrimination by gender is still very much of interest and that there is still much work to be done.

Greed, money and the pursuit of wealth are also important aspects of the play which continue to be played out in today's society. Bassanio realises that without funds, he can never win the hand of the fair Portia, given the competition from the other princely suitors. Lack of money keeps him from attaining his dream until his friend Antonio finds a way of raising the sum. Unfortunately, the loan comes from Shylock, who already hates the kindly Antonio because he thinks he is harming the money lending business with his interest free loans. Power then appears to rest with Shylock who believes his bond will allow him to exact revenge on a hated adversary. We see instant parallels between Shylock and the loan sharks of the 21st Century, who prey on the most vulnerable in society to make their ample living through high interest loans.

However, perhaps the theme which still attracts the most attention today is that of justice and mercy, along with the associated dangers of revenge and its aftermath. Unfortunately, we still see regular examples of loss of life through revenge attacks in our news bulletins today. In the play, Shylock ignores the many pleas to spare Antonio's life when he is unable to pay back the loan. Even at the trial, Shylock remains inflexible and insists that under the justice system the pound of flesh is rightfully his. However, once Portia (disguised as the young man of law) cleverly proves that Shylock in unable to obtain his due, and that he is actually guilty of conspiring against the life of a Venetian citizen, the Duke shows mercy in choosing to spare Shylock's life. Antonio also chooses to be merciful in refusing to take half of Shylock's estate. This demonstrates the New Testament principle of 'turning the other cheek' by showing mercy even to those who show no mercy for others. This idea that justice should always be administered with mercy still underpins our modern day judicial systems and continues to be of interest and importance to the audience of today.

In conclusion, the continuing worldwide popularity of The Merchant of Venice and fully-booked performances at Shakespeare's Globe in London, seem to indicate that the themes of love, prejudice, greed, justice and mercy remain just as relevant to today's audiences as they were to theatre goers in the Elizabethan Age.

The Merchant of Venice: comprehension questions

1. Which characters did Shakespeare 'borrow' from Italian stories which were already in existence in the 1500s?
2. What experience has had a great effect on the development of Shylock's character?
3. Why does Shylock want revenge against Antonio?
4. Who does the writer suggest are the modern day equivalents of Shylock?
5. According to the text, what idea still underpins our judicial systems today?

(4 votes)
published in Graded Reading 2018
Read 18427 times
Last modified on Wednesday, 28 November 2018 14:57
More in this category: « Looking for fun ideas for your Halloween party? Ever heard of Hogmanay? Find out before 31st December! »